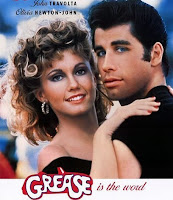 Directed by Randal Kleiser
Starring John Travolta, Olivia Newton-John, Stockard Channing, and Jeff Conaway
Ok, so my lazy ass finally got around to watching Grease. I'm not going to lie to you. I had my netflix copy for about 2 months and really never felt like watching the stupid thing. And, why should I? Because I've been subjected to countless cackle of college sorority girls singing it in bars and making every one else's ears bleed? But, I can't really blame them. I'm the one that was lured in by the sound of sorority girls anyways. You know the song...You're the one that I want, Ohh Ohh Ohh...If there is a jukebox and sorority girls I think it plays about ever other song. As I write this the song is stuck in my head.
Wow, I didn't really realize how old John Travolta has got in last few years. I couldn't help but be amazed that somehow his career evolved from singing "Greased Lightning" to a very, wierd and almost homoerotic dance routine...to...that fat dreadlocked alien in "Battlefield Earth". Was this before his scientology days? Maybe Travolta his an alien. Oh well...doesn't matter...because I like the way he smokes cigarettes when he plays his crazy parts (i.e. Broken Arrow, Face-Off). Wasn't he dreamy girls?
What can I say about Olivia Newton-John. She was freaking hot. Especially, when she came out at the end dressed like a greaser. Ohh Ohh Ohh! I like what I seeing, Sandy. That's all I will say about her.
As for the rest of the film. It wasn't that bad. I probably won't watch it again. Personally, I would rather watch "Mamma Mia" again. Yeah, I said it. Accompanying me during the chick flick was a ice, cold Guinness. Why? Because it looked like a big, pint of grease. Yeah, that's right. I'm creative like that.
FORCE THE BOYFRIEND: 2 out of 10 (1 means he'll hate it, 10 means he'll like it)

Watch it if you liked John Travolta and you thought he was dreamy.
Chick Flick: 3 cartons of ice cream (out of 5)
DVD: 2 pieces of milky chocolate (out of 5)
Beer: 5 manly high fives (out of 5)