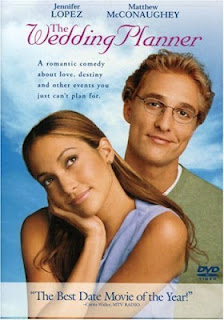 Tagline:  A romantic comedy about love, destiny, and other events you just can’t plan for.

Well, folks, that says it all.  See you later.  Hope you had fun.

Now, get up and rock!  This movie is about weddings, and planning, and control freaks, and fiancés, and divorces, and carnations, and San Fran, and J-Lo, and “alright, alright, alright” McConaughey.  That’s right, McConaughey.  He plays a doctor, wears glasses and has sandy blond hair, if you can believe that.  J-Lo plans weddings,  lives in a average looking apartment in San Fran and she can't find a man, if you can believe that.  Can you believe that?  If you can’t believe it then suspend some disbelief.  It’s a chick flick, people!  Let’s rock!

As I was saying, before I went off on a tangent, this movie is obviously about a wedding planner.   J-Lo is the wedding planner, obviously.  And, she is the best.  She took Geri’s business and turned it around, made it some serious money, and if she can land the Donolly wedding, which is huge, then guess what, she’ll make partner.  On her way, to an appointment, she gets her nice Gucci heel stuck in a sewer cover thingy and almost gets run over by a dumpster before being saved by McConaughey.  She passes out and wakes up to learn that McConaughey is a pediatrician, and a cute one at that.  She invites him to a movie in the park, and he has “the best time he has ever had in this city."  They almost kiss and it rains.  Stupid rain!

The next morning J-Lo is estatic.  She can’t stop smiling.  We know this because Fran Donolly tells her she is.  She tells her all about the great guy she met, and the great evening she had, and how they almost kissed.  They go together to Fran’s Dance class to meet her fiancé.   And, SPOILER, surprise…it’s Matthew McConaughey.  How is that for plot twist!  I almost spit out my beer!  I really couldn’t believe it.  I mean, who would?  What a coincidence!  Wow!

Now, I know everyone out there wants to know, “Should I watch I it?”  Well, I’m here to tell you, 11 years later, that…what the hell…why not?  Is it the best chick flick ever? Is it entertaining?  Sure.  Does it have cheesy acting and weird plot points?  Yes.   Do they fall in love way too easily?  Yes.  The fact that they fall in love is really unbelievable.  Does McConaughey mumble McConaughey-like phrases and statements like “groovy” and “alllllright” and “chahighhashahia?”  You bet your ass he does! 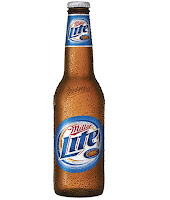