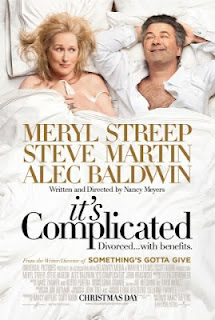 Having struck a seedy back alley deal with the missus, I found myself sitting down in the theater to watch "It's Complicated." This is the newest film modern menopause cinema has to offer and who better to bring it to us than Nancy Meyer, the poster girl of the movement. With her last outing "Something's Got to Give", I was surprised by the humor and relieved by its wit. By the end of the movie I was sold into wanting for these characters. Not the case with this one. The setting is similar, beautiful home and countryside, swap east coast for west coast, everyone walks around eating pastries and drinking white wine. Money doesn't seem to be a problem. In fact, there aren't really any problems with these people.......and that's when things get COMPLICATED.

Meryl Streep is the cougar with the heart of gold and Alec Baldwin is the douche bag, absent, full of sh!t father who somehow isn't responsible for any selfish thing he does. Steve Martin is the nice guy doormat. Well, you can see where I'm going with this, it's time for a fifty-something love triangle! They've been divorced for 10 years. He's remarried to the mistress, she's lonely but oh so brave and independent. They screw, she feels guilty, he doesn't. All sorts of hijinks ensue, and all the while she's kinda sorta dating Steve Martin. Most of the screen time is dedicated to Alec Baldwin bullshitting his way into Meryl Streep's granny panties and it only gets thicker and more absurd. Ladies, imagine your man laying in bed with you on a Sunday morning trying to get some nookie. You know, just laying it on thicker and thicker till you just give it up to shut him up. Well, there's 2 hours worth of it here, just in case you ever wanted to know how divorcee's get down.

This may sound like the ranting of an angry boyfriend forced to watch a chick flick, and well... it is...but it's also the voice of someone trying to reach out. I want to like these films, comrades, I do but the chick flick is a subtle art. When done properly it will persuade and move the male to see more Romcoms, even oddly looking forward to the next one. Characters are everything and this one didn't have any that I even cared about. I have a feeling this film is more realistic than I want to admit. About divorce, about growing older, about re-discovering social rites in a world that has changed. Maybe I judge it too harshly. It wasn't a bad movie by any stretch. There was even a funny marijuana sequence involving Steve Martin being, well, Steve Martin which unlike Alec Baldwin's schtick will never get old.


FORCE THE BOYFRIEND: 6 out of 10 (men will like this more than they think but will grow tired of Alec Baldwin)

Beer Pairing Recommendation
It was so complicated I couldn't chose a specific beer...much like Meryl had a hard time picking a man

For more on this chick flick, visit IMDB