Oh, Zooey Deschanel...Are you every 16 year old teenage hipster's fantasy? Do they have a picture of you skillfully tacked next to their Vampire Weekend poster? Oh, Joseph Gordon-Leviit...Do you cross-dress in your spare time? Did you and that little hobbit, Frodo or Elijah, run off together for the weekend to spend your days rolling around in the surf? Is my imagination getting the best of me?

Just in time for Fall, or Winter (depending on where you live) its "500 Days of Summer"...It's not a love story, in fact, it's actually the opposite. I'm not spoiling anything for those who haven't seen it. The narrator will tell you this within the first 10 minutes. So, SPOILER ALERT- NOT- they break up in the end. Actually, they break up in the beginning, but the film is not really in chronological order so even though the break up is the end of their relationship, it's at the beginning of the film. You feel me?

With that being said...It is not a bad movie. It has a little bit for everyone, non-hipsters included. It told from a guy's perspective (for the guys), and is about a relationship (for the girls). Plus, it stars Zooey Deschanel (for the hipsters). It employs a lot of excessive film school techniques (for people who went to film school), and it has a girlfriend-less best buddy (for the girlfriend-less best buddy). My favorite scene would have to be the "expectations" versus "reality" segment. I won't spoil it for you but I found it to be somewhat realistic in a filmy sort of way.

The beer I consumed during this piece was Blue Moon's Harvest Moon. There are pictures of pumpkins on the label, but I taste none (in a British accent). It's pretty good though, so try it out before fall ends...you hear me, fools!

This film has a good lesson...that is...if you're dating Zooey Deschanel then she is going to break up with and leave you stranded after 500 days.


FORCE THE BOYFRIEND: 7 out of 10 ( Male lead- Force this one on the girlfriend)

Beer Pairing Recommendation
Nothing goes better with being blue than Blue Moon Harvest Pumpkin Ale
It's seasonal so be sure and look out for it.  Although, not much pumpkin taste. 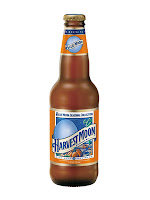