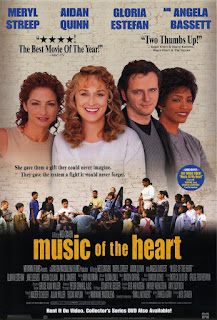 From the critically acclaimed, award-winning master of horror film director Wes Craven comes the heart-stopping, shock filled, terror-inducing, Music of the Heart. See Meryl Streep survive a ghastly divorce! Gasp as Meryl Streep moves into Harlem! Scream as she comes face-to-face with inner city children! It is a film so frightening, so terrifying, so bone-chilling, that it changes the face of modern horror! Wait, the music isn’t scary? And, the heart isn’t bloody? You mean to tell me this is a chick flick! Now, I’ve seen everything!

For those of you that don’t know Wes Craven, he is the writer/director of such films as The Hills Have Eyes (1977), A Nightmare on Elm Street (1984), and Scream (1996). So, it is rather odd to find an “inspired by real events” chick flick lodged into the middle of his resume. Music of the Heart, stars Meryl Streep as Roberta Guaspari, a recently divorced mother of two young boys who must take a part-time job in Harlem teaching elementary students the violin. The job isn’t easy, but Roberta is tough, and stubborn and willing to make it work. She quickly learns that to survive in Harlem, and to protect her boys, she has got to stay strong. As time passes, she creates a very successful violin program that is beneficial to the community.

Meryl Streep, as Roberta, successfully carries the weight of the film on her back. She is in every scene, and as always is great. Surprisingly enough, with Wes Craven at the helm, this film does not carry too many surprises. At its “heart” it’s nothing more than a feel-good movie with a predictable plot and ending. But, that doesn’t mean it’s a bad movie. Sometimes we want to watch a positive film about people that doing great things. This is that type of movie.

So, to all the Wes Craven fans out there, unless you want to be scared, or chick flicks frighten you, don’t expect to be scared. Some chick flicks are pretty scary, though. I hear some people are scared of Meryl Streep, so go figure. I even heard she played the Devil, once. Maybe, Wes Craven was up to something after all.


FORCE THE BOYFRIEND: 4 out of 10 (He probably won't like it, unless he wants to be inspired) 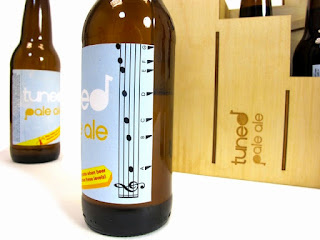