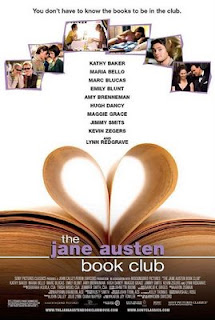 This movie was not recommended to me. I chose it because the title alone sounded horrible and very “chick” to me. It seemed like the farthest thing from anything I would want to watch. What could be interesting about a bunch of women sitting around talking about Jane Austen? It was directed by a chick, written by a chick, starred a bunch of chicks. In other words, it made for women by women.

To accompany the flick I went with the obvious choice, Budweiser, the King of beers. There was no alternative. What is more American than Jane Austen and Budweiser? After all, Jane Austen is one of America’s best known “chick” authors and “Dr. Quinn Medicine Woman”. Then I found out she was British and wasn’t even a doctor. So what? Budweiser isn’t American anymore. They were one of the last great American companies then they sold out to the Swedes or some other country. So we have an ex-pat beer and a British chick author, Jane Austen and Budweiser. The two still go hand and hand.

The movie is about a group of women (and one dude) who escape the difficulties of everyday life by creating a book club and reading Jane Austen. The rules are simple. There are six books and six members. Each one gets a specific book and hosts a meeting with food and discussion themed after their specific book. The drama in their lives reflects the drama in Jane Austen’s stories and vice versa and versa visa. Oui Oui.

Each women in the group is different from the next. There is the newly divorced Mother, her young lesbian daughter, the spinster, the socialite with multiple ex-husbands (what do they call those again?), the overly tense, uptight young high school French teacher, and the guy is a semi-dorky science fiction fan. There is plenty of drama to go around. The divorcee sees her husband running around with his new piece of ace, the French teacher is fantasizing over her beefy student, the lesbian loves too easily, the spinster is trying to set the divorcee up with the sci-fi geek but likes him herself. The only chill one is the older woman that has been married multiple times. But, don’t let that fool you. This had plenty of gossip to fill my drama king lifestyle.

Now, the question is, “Did I like the movie?” The answer is, “Yes, I did”. As the movie progressed I went from completely uninterested to finding it pretty enjoyable. I cared about the characters and what happened to them and I liked the story. It was a neat premise and while technically it did have its fault (dialogue, stereotypes, cheesy music, clichés, etc) I won’t really go Into to all that here. Focusing on the story I enjoyed it. Plus there was a little bit of lipstick lesbian action. For you girls out there, If you haven’t seen it then watch it.